Enjoying the puzzles of Shakespeare’s literacy

Website: https://twitter.com/shakesmears Email This email address is being protected from spambots. You need JavaScript enabled to view it.

What are the biggest obstacles that people face when it comes to studying Shakespeare? If you ask a group of students most of them are likely to come up with the same answer – the language. It’s old. Archaic, even. They don’t understand it. A group of teachers are likely to give a different response – teaching rhythm is no fun. They’re bored of teaching iambic pentameter. Students don’t see the point. However, neither of these problems needs to be a barrier and both can be approached using interesting and engaging techniques.

"Even the most reluctant Shakespearean learner can be coaxed into hurling an insult or two."

When teaching Shakespeare, it is a good idea to address the issue of language first, even before you start work on the actual text you will be using. The first nugget of information you can use to gently debunk the idea that Shakespeare’s language is outdated and difficult to understand is the statistic that around 95% of the words he used are still in current usage. This leaves just 5% that we may have to work a little harder to understand.

One increasingly popular approach to familiarising students with Shakespeare’s language is to use a Shakespeare Insult Generator. These come in several formats, from the simplest three columned lists to spiral-bound books to online generators, but they all have the same function: to allow playful activities that get young people using Shakespearean language, even if it is in calling their best mate a panderly, motley-minded mushrump. Even the most reluctant Shakespearean learner can generally be coaxed into hurling an insult or two. You can plan any activity you want around this resource but whatever you do I think a good outcome is for each student to choose their favourite insult and to write them out to use in a classroom display. It will certainly be a talking point. 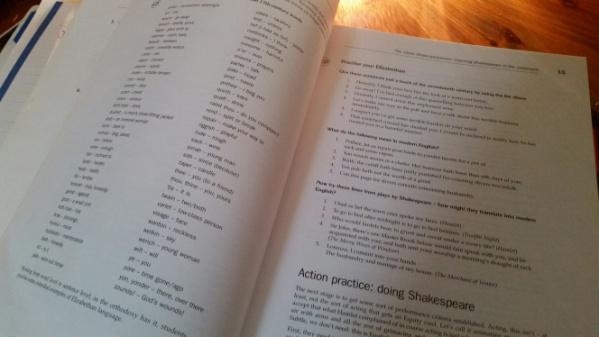 Another good starter language activity is to get students to translate sentences or phrases from modern to Elizabethan English or vice versa. The best resource I’ve seen for this is in Peter Thomas’ The Complete Shakespeariance published by NATE (pictured). This provides a glossary of Elizabethan words and lists of sentences to be translated. Students gain a real sense of satisfaction in discovering the meanings of archaic words such as avaunt, forsooth and prithee, as well as successfully using them in context. This builds their confidence in dealing with Shakespeare’s language. You can also combine the activities by getting your students to build their insults into fuller sentences; “avaunt thee, thou beslubbering, stretch-mouthed fleshmonger, methinks thou hast a visage like a jakes!”

Once you begin to work with a particular text you can explore language further using a resource such as David and Ben Crystal’s Oxford Illustrated Shakespeare Dictionary, or the notes in any good edition of a Shakespearean text to look up the meanings of those awkward 5% of unknown words. Alternatively, compile your own glossary of popular Shakespearean words and produce your own sentences for translation – this groundwork will give you a class who are less intimidated by Shakespeare’s language and who will, hopefully, be ready to engage with the language of a play. Encourage them to speak the language of the play themselves, however I would avoid the type of solo reading around the class that has blighted many a student’s experience of Shakespeare. Opt instead for group readings. Stand in a circle and read a speech or soliloquy together, in unison.

I would always ask students on a first read to ask about words they don’t understand, then see if you can work them out together using the context and the feeling of the words around them. Once the speech is more familiar you could allocate lines per student / student-pair and ask them to provide gestures for keywords in their section. A repeat reading with students reciting their lines accompanied by these gestures can enrich the meaning for the class while improving their confidence in speaking the language. Remember, in the wise words of Ralph Alan Cohen in his invaluable Shakesfear and How To Cure It, “Many teachers, approaching Shakespeare’s work for the first time under the preconception that Shakespeare’s works have definitive interpretations, will spend hours looking for the ‘answer’ to the play. But no critical work will give you the answer for the simple reason that there is no single answer”.

Focus your learners on what they can relate to, the characters and situations. In Shakespeare’s plays they will find a “world of rebellious, restless, amorous, oversexed, ambitious, belligerent, status-conscious, insecure, inconsiderate, thirsty, hungry, energetic, impetuous, smart-ass, competitive, misunderstood young people” (the brilliant Cohen again). The world was ever thus!

"Choose a key soliloquy from your text and ask your students to count the beats."So that’s language. What about the teachers’ bugbear? Teaching iambic pentameter. Well, I would argue that it can be fun. Yes, really. And it’s not the only meter that Shakespeare uses, so consider teaching it as part of a wider topic of how and why Shakespeare chooses different rhythms for different characters and situations. Consider how characters like Hal and Hamlet switch effortlessly between blank verse and prose depending on who they are speaking to. Think about why faeries and witches use different rhythms to other characters, what does that convey to the audience? Remember that Shakespeare’s original audience would have ears that were much more attuned to the shifts between iambic pentameter, trochaic tetrameter and prose.

The witches in Macbeth speak in a different meter to all the other characters in his plays, a trochaic tetrameter that his audience would recognise as the rhythm of children’s rhymes or the familiar, restrictive beat of the Mass. It identifies the witches with an eerie, otherworldly chant that puts them on a different plane to our iambic pentameter speaking nobles.

There are many songs in the plays too and Shakespeare tends to write these in iambic tetrameter, four sets of iambs rather than the usual five. Then you have sonnets, freestanding or embedded, with their familiar ABABCDCDEFEFGG rhyme scheme. An interesting way to explore Shakespeare’s rhythms is to get your students to write their own work in these different forms. If you’re studying Romeo and Juliet or Love’s Labour’s Lost, you’ll notice that Will was playing around with notions of romance and courtly love through the form of the sonnet. Get your learners to write a sonnet from one of the plays’ lovers to their beloved. Teach them about Petrarch and see if they can use the same, overblown, romantic imagery that he is famous for and which Shakespeare satirises in these plays. Make sure they do it in iambic beats (go on, count the beats in that sentence!). Love’s Labour’s Lost has songs dedicated to spring and winter, praise autumn in tetramic beats (yeah, that clause is eight beats).

If you must explore the good old blank verse then there is a fun way to do that. Trust me. In Shakespeare on Toast, Ben Crystal points out that as Shakespeare’s writing skill developed he became more adept at playing around with the iambic rhythm. Crystal describes him as using it like jazz. To explore this fully you can use an iambic pentameter cardiogram. 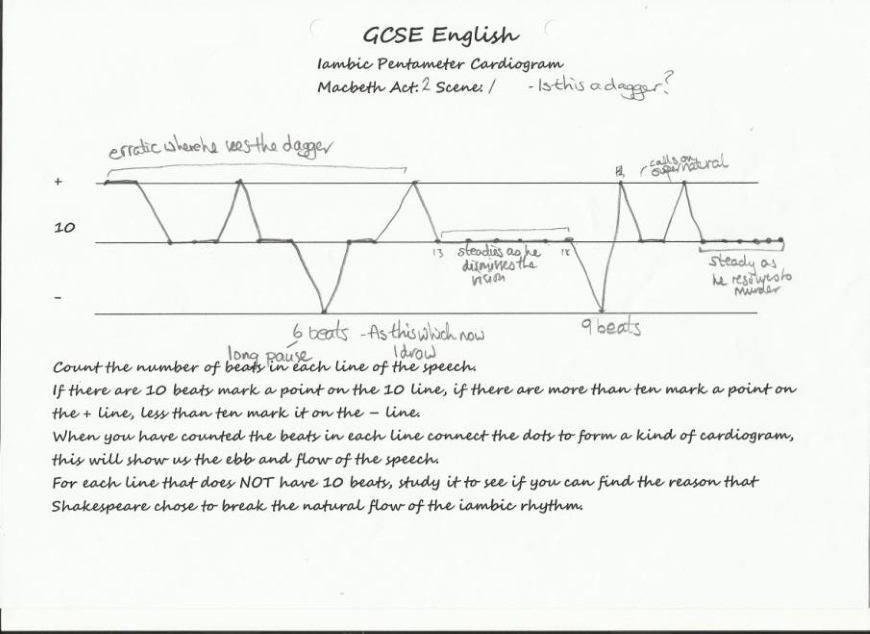 This is a graph (ooh, Maths embedding!) that has 10 as the centre line with + or – above and below it. Choose a key soliloquy from your text and ask your students to count the beats, line by line, and then to place a dot on the relevant point on the graph for the number of beats. Once all the lines are counted, join the dots and you will have a visualisation of the speech which looks a lot like a cardiogram. You are then able to explore the speech more thoroughly, to see what the character is thinking when s/he speaks in the regular ten beat pattern and what the thoughts are that are driving the rhythm into irregularity.

It can reveal interesting reasons for Shakespeare’s deviations from the strict iambic pentameter beat. And it is far from boring! This approach, along with exploration of the impact of punctuation type and placement can be further explored with Ben Crystal’s Springboard Shakespeare series of books (Currently available for Hamlet, Macbeth, King Lear and A Midsummer Night’s Dream). Hopefully this will make you realise that teaching iambic pentameter can be approached in interesting ways that are far removed from the de-dum, de-dum heartbeat approach.

Language and rhythm are at the very heart of Shakespeare’s creative genius, and I believe they should be explored with learners. They can lead to moments of fascinating self-discovery and those are the moments that bring Shakespeare to life for your students.

How do you go about teaching Shakespeare to savvy pupils? Let us know below.