‘How to catch a porridge thief’: Hooking Year One into traditional tales

What comes to mind when you think of Goldilocks? Sweet, innocent little angel with pigtails and a healthy appetite? Maybe. However, when planning for a literacy unit on traditional tales, I decided to focus on the true moral of the classic fairy tale by portraying Goldilocks in a new light: as a porridge thief!

To introduce the unit, my colleague and I set up a crime scene at school, complete with a ransacked breakfast table and various other clues to the identity of the perpetrator, such as a red ribbon, a lock of blonde hair and a discarded gold necklace. The crime scene was cordoned off with police tape of course, meaning that only the most sensible prospective police officers could examine and photograph the evidence. 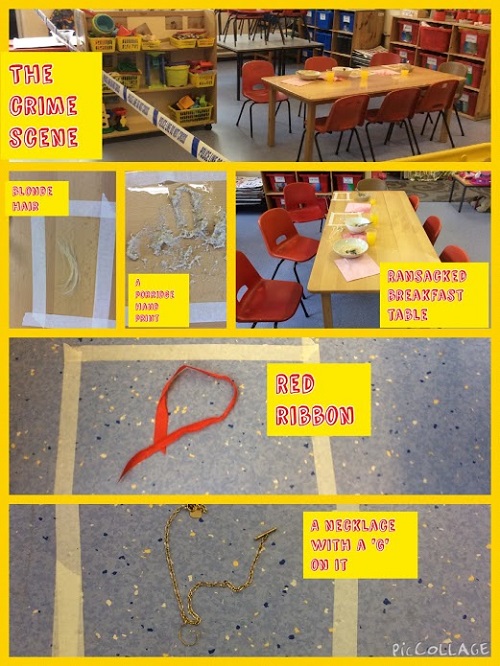 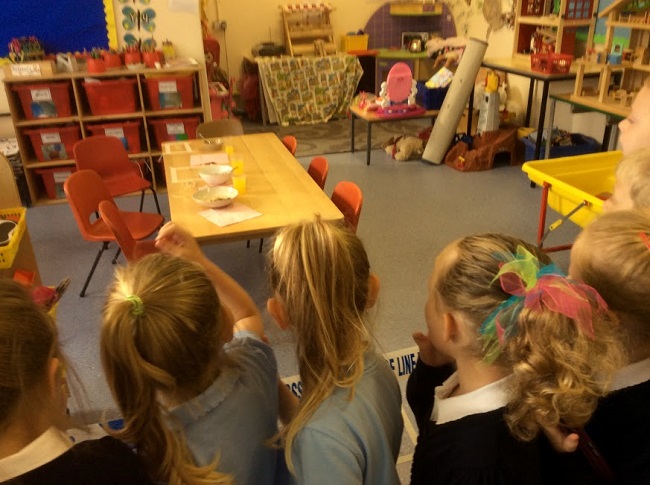 The crime scene was the perfect opportunity for speaking and listening, as it inspired the children to discuss the clues and come up with an e-fit of the prime suspect based on the evidence. For example, after discovering the necklace, the children decided the suspect must be female with a name beginning with ‘G’ and she was more likely to be a child given that she only ate Baby Bear’s small portion of porridge.

At the start of the following lesson, whilst in role as Officer King, I shared some crucial new developments in the case: CCTV footage and witness statements.

Using this visual image of the prime suspect, the children were then able to create ‘wanted’ posters to display around school. I created the CCTV footage using the time-lapse tool within the camera, which is new to iOS8. I could then add a filter, music and text to the video within the iMovie app. The witness statements were recorded easily using the Audioboom app and then embedded into this blog post. 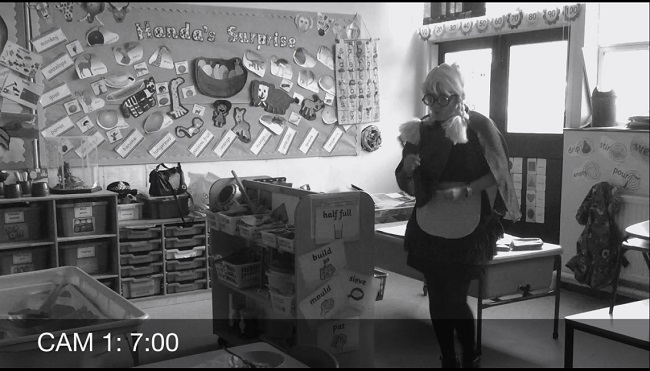 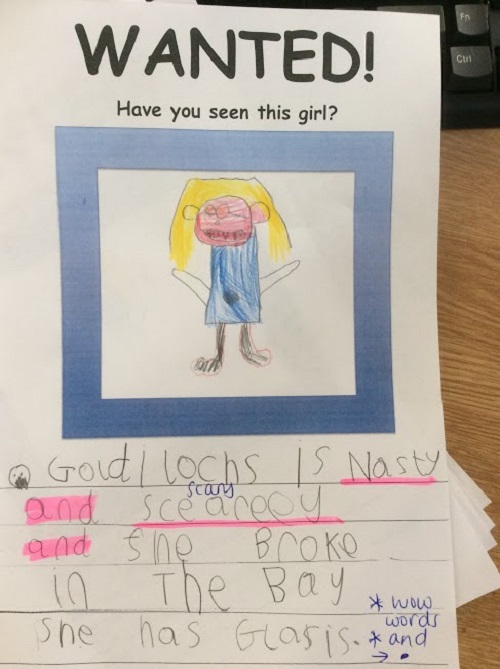 The most exciting development in the hunt for the Denton porridge thief came on day 3 of the investigation, when Officer King returned to reveal that, thanks to the team’s accurate posters, the suspect had been arrested and was being held at Denton police station! The class were totally convinced by the following mugshot (created using the free Mugshot Booth app) and no one suspected the true identity of the detainee! 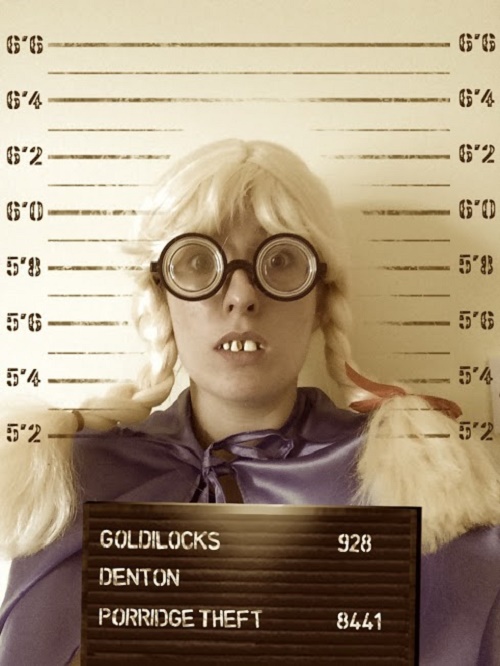 Officer King explained that the suspect had been questioned by police, but hadn’t yet admitted to eating the porridge. Children watched the following interview between Goldilocks and the chief of police:

I made the interview video using Morfo app for iPad, which enables you to import a photo from the camera roll and bring it to life with various effects and an audio recording. Voice pitch can be altered to make the characters more convincing. I recorded each question and answer individually, saving each one to camera roll then sequenced them using iMovie. Again, the children were enthralled in the investigation, convinced by its authenticity.

Officer King then challenged the children to write their own questions for Goldilocks, ahead of interviewing her themselves the next day. 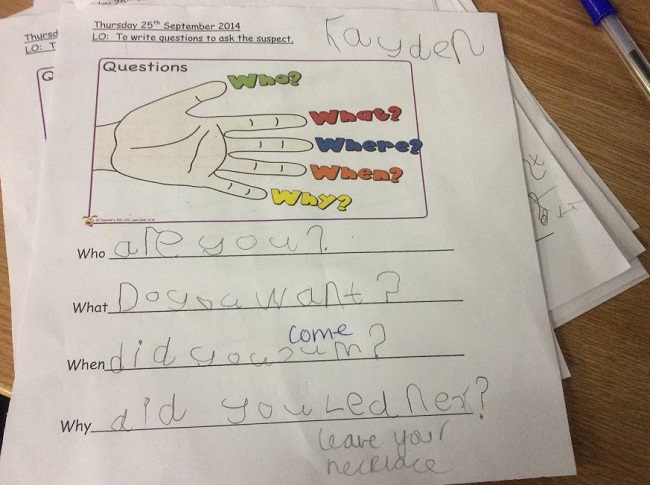 The hunt to bring the now infamous Denton porridge thief to justice came to a dramatic close on the following day, when the children were given the opportunity to interview Goldilocks herself, via the magic of technology. Coveritlive enables you to host a virtual conversation with anyone. All you need is one adult to lead the children and another adult hidden with a computer or iPad, poised and ready for action! The children proved themselves to be ruthless interrogators and Goldilocks eventually cracked, admitting her guilt! You can read the full interview here. 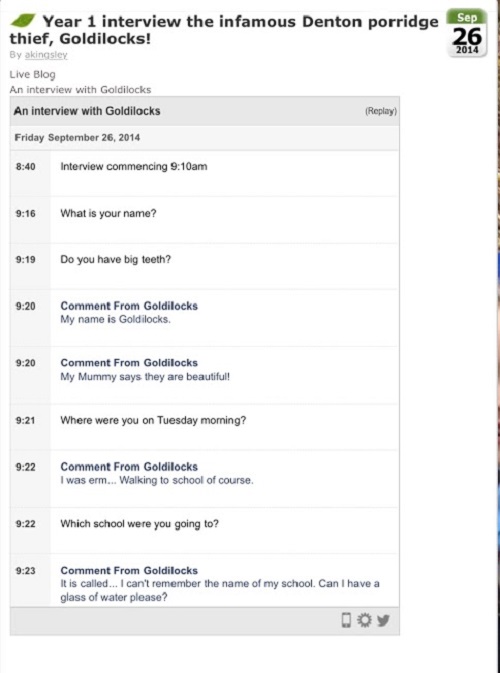 After a week spent hooking the children into the topic, we moved onto instructional writing, using Pie Corbett’s Talk for Writing to learn, plan and write a set of instructions for how to catch a porridge thief. The process involved learning the text orally with actions, planning their writing using a text map with pictures and subsequently writing the text. Here is a video of my class performing the text, and pictures of their written work: 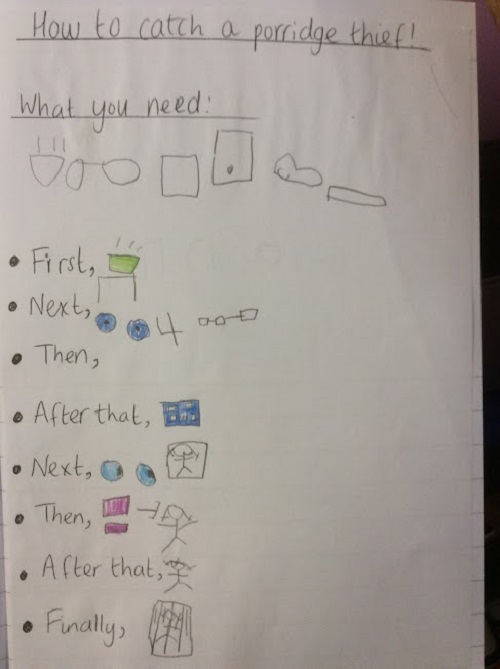 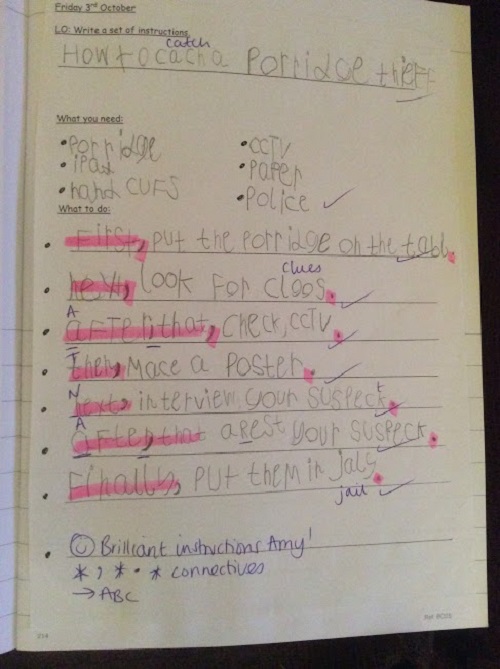 As a result of the pupils’ engagement in the topic, we decided to continue with the story of Goldilocks for our next literacy unit: setting descriptions.

I set up the Three Bears’ cottage within the classroom, thus enabling the children to use their senses to explore and describe. On entering the ‘cottage’, children could see Goldilocks sleeping, and hear the sound of her (peculiarly deep and masculine) snoring. They had the opportunity to taste the porridge, smell the flowers on the breakfast table, feel the heat of the burning fire and see the Three Bears’ chairs. This kinaesthetic experience was very memorable for the children, and a great stimulus for a written setting description. 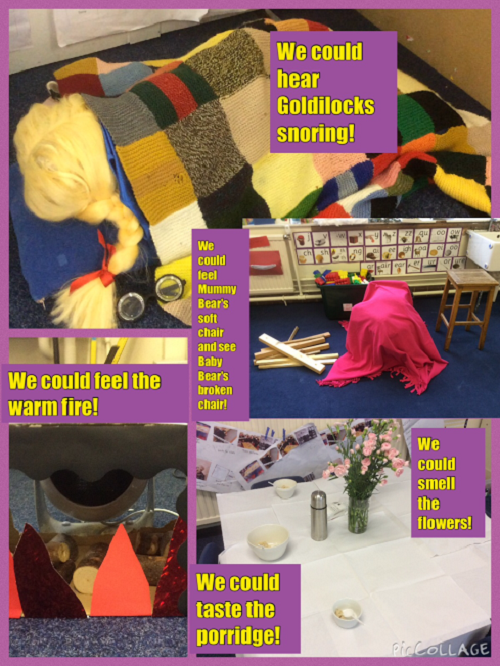 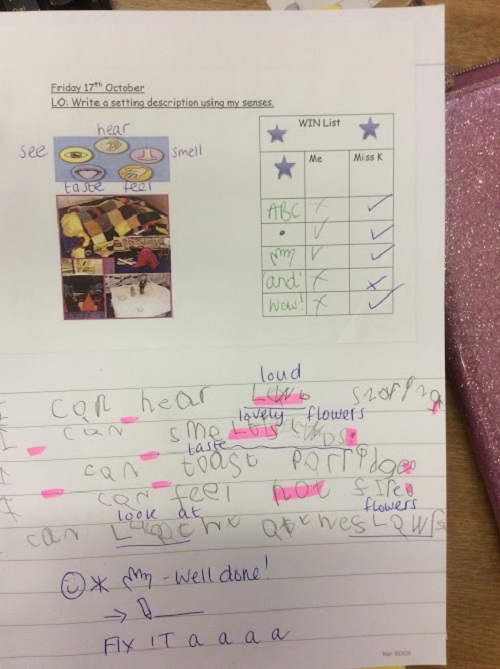 The finale of this exciting unit on Goldilocks was our movie week. The school took part in an Oscars week, with a whole school ICT focus on the use of iMovie. Year One decided to collaborate as a class for Goldilocks: The Movie. Once the film was complete, each class enjoyed an iMovie celebration event, where children were treated to a red carpet arrival, popcorn and an exclusive showing of their movie. Visit the following blog post to watch our movies:

To create the movie, pupils used green screens to superimpose themselves into the forest and the Three Bears’ cottage (a green screen in your classroom is necessary for this, and can be made using green paper or material) and iMovie to sequence all the clips, add images and voice recordings. I find the Green Screen by Do Ink app easy for pupils to use, and the audio tool (or microphone icon) within iMovie particularly Key Stage 1-friendly. 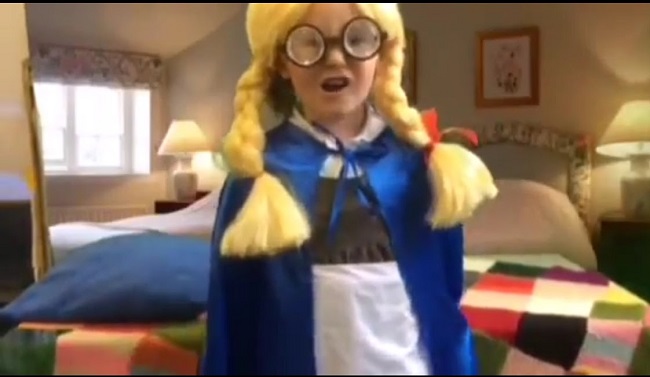 Setting up a crime scene for pupils is by no means a new idea. I was inspired at the beginning of my career by Sue Cowley, who shared the idea during her course for NQTs. I enjoyed combining this brilliant idea with technology to hook my pupils into writing and I believe the following tweet, received during the ‘investigation’, says it all! 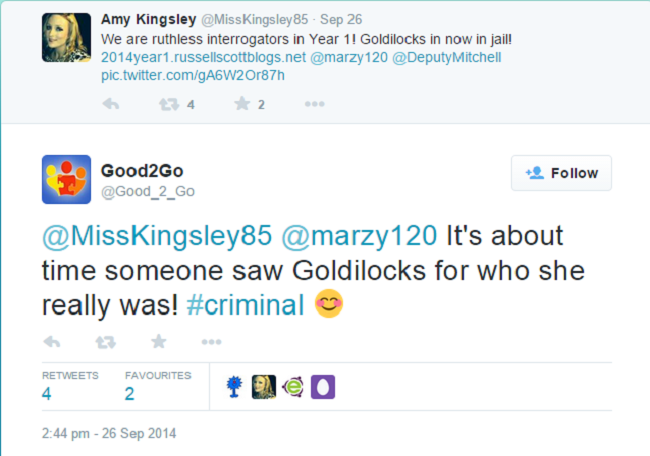 Please do follow me on Twitter (@MissKingsley85) and my class account (@ClassMissK) to follow our exciting learning journey! For more examples of how I am using technology in my classroom, please visit our class blog or my own literacy blog.

Looking for resources to support your teaching online? Check out our unique list of the best free online resources on the independent review platform EdTech Impact.