Engage your pupils by making a film!

For the last year, Claire Bracher has been an assistant headteacher leading whole-school English. She is now about to embark on a new challenge at The West Thornton Primary Academy in Croydon this forthcoming September, where she will be an assistant headteacher and full time class teacher. Claire has a passion for teaching and learning, but is particularly interested in project-based learning and growth mindset for children. Building a resilience for learning and risk taking is something which Claire believes to be an essential part of developing life skills in children. A collaborator at heart, Claire loves to work with those around her, whether in the real world or in the Twittersphere. Always striving to improve and be the best she can be, Claire loves working in education and her own passion for English, History and creativity continues to grow with each challenge.

Website: https://clairebracher.wordpress.com/ Email This email address is being protected from spambots. You need JavaScript enabled to view it.

During the course of last year I came across A Tale Unfolds and it fascinated me. A combination of English and Computing skills combined; an opportunity to really engage the children in their learning. I had looked at those teachers who had successfully used it, such as Graham Andre and Rachel Preece-Dawson, and naturally I was keen to give it a go. When I won a trial of the scheme I was over the moon. I took it with me to my new school and trialled it in the Autumn term with my Year 5s.

A Tale Unfolds is basically a scheme of work and ideas to engage the children in their writing - but with a twist. Woven into the writing ideas are ways in which the children can develop their Computing skills. This is what I loved about it. As you go along with the lessons in English, so the children find themselves developing their use of ICT.

As the children work with the text, they learn and develop their comprehension of the characters and the storyline. What my children loved was that they then had the opportunity to start working on their own. I am never one for guiding the children with their ideas. I like them to think for themselves and be creative. I am there to facilitate the development and improvement of these ideas in that I build their skills, but I have always been a firm believer in letting the children lead the way.

This is where A Tale Unfolds proved to be hugely successful. It enabled me as a teacher to teach the skills needed to achieve an excellent standard of writing, but it gave me the flexibility to allow the ideas to be their own. The children worked independently, in groups and as a class to collaborate and share their ideas. Much was learnt through speaking and listening to others and I often found myself caught up in magical moments of role play and wonder. Watching even those that had never enjoyed writing before suddenly found that they were interested in and enjoying their learning was fantastic.

The involvement of Alan Peat in the writing ideas enabled my children to see how using grammar in particular was could achieve certain effects on the reader. I have been an Alan Peat fan for a few years now and always find myself returning to his resources. They were familiar to me, and as a result I was able to take the ideas offered, tweak them and make them my own for my class. It allowed personalised learning to happen which was visibly successful.

As you work through the ideas and scheme, the children work on their ideas for their own film. They choose their characters and they build these into their own plot and setting. The links made back to the text are very clever. My children particularly enjoyed linking their own plot to the text but putting their own twist on it. They relished the idea of enthralling an audience and this is the crux of it: it gave them a purpose for working. A reason to do their very best. The end result would be seen by an audience. They wanted to showcase their work and wanted to challenge themselves. Those who had previously believed that their writing was lacking found that they were able to contribute successfully to the ideas. Working in mixed-ability groups gave everyone a chance to succeed and improve. The writing in my class came on leaps and bounds within weeks. The mention of ‘our film’ and ‘English’ brought about smiles and excitement for weeks on end. 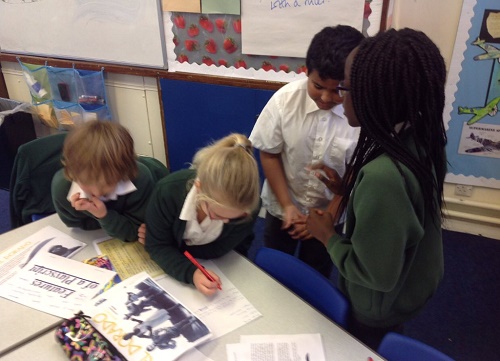 As I write this, my children are on the verge of now having their film ready for it’s premier. Our intention is to celebrate our work and invite all those who have been involved to come and see what they have achieved. They have written their own programme and are now in the process of finalising everything needed. Their books speak for themselves. Progress, progress, progress; engagement, excitement, a thirst for learning.

As a teacher it has challenged me. I would love the opportunity to try it again. It has enabled me to develop my own use of ICT, and through the support of both ATU’s Dom and Mark Anderson, I have been able to see how much can be achieved when ICT is used for the right reasons. My own confidence has grown, and with it my ability to try out new things - take new risks. As a risk-taker at heart, I have relished this opportunity.

Our film, currently a closely-guarded secret, is due for release very soon. Our books would be available to the entire world if possible. We are proud of what we have accomplished together. If I had the chance to work with A Tale Unfolds again I would love to. As with everything I have learnt from the mistakes I made initially. Reflecting on my practice is always “Progress, progress, progress; engagement, excitement, a thirst for learning.”something that I do. The next time around I would, for example, add more of my own ideas into the lessons. Now I have found the confidence to use the scheme, the teaching and learning would only improve.

I think if you are looking for a true mark of success, it is not so much in the ideas for lessons, but in fact in the work achieved at the end. It is the use of those ideas and their purposeful application that really makes a difference. We all have ideas. We magpie and tweak everyday. That is what we are masters at. Where the real evidence lies is in quality of work achieved. This is what shows that real learning is happening as a result of those ideas.

This scheme for me gave some excellent ideas and provided a huge engagement from all of those involved. The work and the end result, for me, speaks for itself and I would highly recommend it to anyone.

I asked the children to write part of this blog with me. I asked them to give me their feedback on the scheme in the form of ‘what went well’ and ‘even better if’. They loved this opportunity (we all know children love to be teachers whenever they can). Here is a selection of their feedback:

“A Tale Unfolds has really helped me with my punctuation. I have loved working on our class film - it’s been great fun! To make it even better I would like to come up with alternative endings for our film.”

“A Tale Unfolds has helped me to enjoy writing. I have also had some really good ideas to use in our film. To make it even better I would like to have the chance to create more characters.”

“I have really loved A Tale Unfolds, especially working with my friends to come up with ideas for our scenes. Giving out plot a twist has been great! There isn’t anything I would do to make it even better.”

“A Tale Unfolds has really helped me to think about my writing and make sure I get all my grammar and punctuation right. I am really looking forward to seeing our film. To make it even better I would like to have been able to have made our film even longer.”

Have you ever created a film with your pupils? Let us know below!