Julian is an Assistant Head at an inner-city primary school in Sheffield. He has been teaching for 14 years. He is a passionate advocate of using new technology in education and was awarded ‘Microsoft Innovative Educator 2010 Award’ for using new technology in school, with his project about stimulating writing using QR codes and mobile devices.

Julian co-created the Creative Partnerships 'inathirdspace' project in 2009. Which partnered teachers and artists for their own CPD, staff used mobile phones to post photographs and text to a website and used a twitter account (@inathirdspace) to give lesson feedback in an innovative way.

In January Julian presented in a 'break-out' session at the Learning without Frontiers conference in London. He has also been a speaker for the Open University National event ‘Using Web 2.0 technology and Storytelling’, presented about ‘Creative Web 2.0 Learning Provocations’ at the Cape UK, Yorkshire Creative Partnerships Conference. Julian lead a workshop at the National College for School Leadership (NCSL) Future Leaders Course and also presented at a regional ‘Thinking Skills’ Conference in Newcastle. He has presented at 9 Teachmeets.

Website: ideasfactory.me Email This email address is being protected from spambots. You need JavaScript enabled to view it. 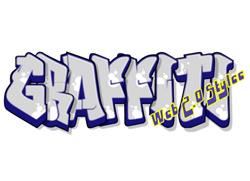 Kids love graffiti, nowadays known as ‘urban art’. I am pretty useful at lettering and often my students ask me to teach them how to do it.